Oh, my poor blog. So neglected. I know. I know, blog. It's not fair. I've been posting on that sexy little tumblr every day for the last three months. Leaving you alone, blog, unloved, unupdated.

But you know I still love you, blog. You my sweet thing.

The Writing Process: that baffling attempt to somehow organize that thing that I call a mind into some form of coherence. But also, the wonderful opportunity to not be an idiot. In public, talking to people, I make an ass of myself all the time, and once you've assed yourself, unassing is nearly impossible. It's hard to remove a foot from a mouth (like last Friday when I called Catholicism retarded without realizing that I was in fact speaking to a real live Catholic). But with writing, there is this fantastic opportunity to put your foot in your mouth and then take that foot out of your mouth without too much awkward embarrassment or physical contortion.

My goal with writing is to just get it all out: get good stuff down, get bad stuff down, hit a high note, put my foot in my mouth, tell a joke, go for raw honesty. All of it. Just let it blurt.

I've gone through a number of ways of doing this. I used to write full scripts with dialogue, captions, staging, everything in them. Then I switched to panel lists (which was how my first book, Flower and Fade was written). These panel lists no longer contained dialogue or any discussion of angles or where characters were, but simply what was in the panel (Panel 1 - Jack looks at Jane. Panel 2. Jane is looking down. Panel 3. Jane looks up at Jack. Panel 4. Jack looks down while touching the back of his neck with his left hand.)(Ooooh. I've got chills!)(And I'm sure some of my friends are saying, "That Jack and Jane story is every comic he wrote between the ages of twenty-two and twenty-five!").

The method I currently use is to write in comic book form. I'll plot out the story roughly in a notebook. In the case of this book, which I think will be around 100 pages, I wrote two pages of notes. I then sit down with a sketchbook and go. I draw a six panel grid on every page and fill the panels, no thought given to layout at all. The goal is just to get the images down. 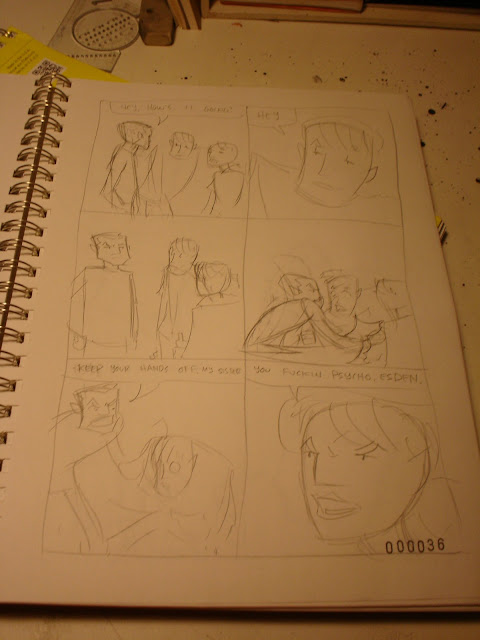 I don't stop, and I don't edit. I may have a bad day. I may draw/write something truly stupid, but the goal is to get to the end. I'll go back and fix things later (and often when I go back, I won't remember what it was I thought was as dumb as the Catholicism).

I like this method more than writing scripts because when I write scripts I get lost in the words. Comics are a visual medium, and when I am writing a script I forget that. Dialogue starts to dominate and there isn't enough visual action. Writing while drawing keeps me visual and makes for better comics (and less to throw out later).

For this book, which is about small town high school baseball, I ended up with 194 pages of rough draft spread out over three sketchbooks. 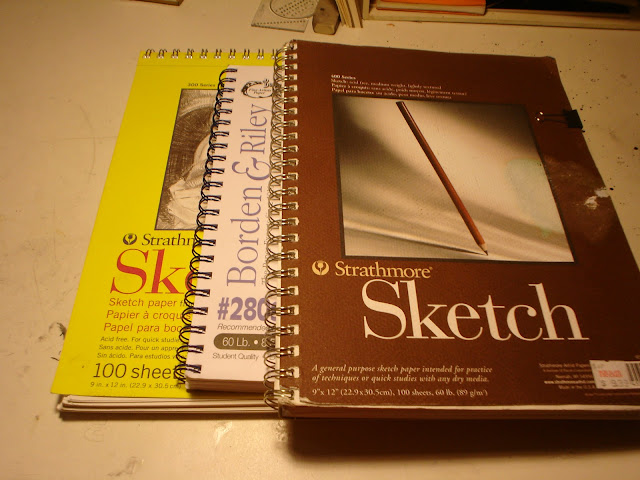 All these pages were numbered and scanned. I'd like to think that there is a purpose to numbering the pages, but I think I do it mainly because I like using my little number stamp to mark the pages.

I turn the scans into a big PDF and send that to whoever is willing to read a really rough draft. I think I sent this one out to about ten people. I'll take whatever I can get in terms of critique, and my belief is that the reader is always right. So if someone says a section is confusing, that section is confusing and I need to fix it.

The central event of this story is a break in done by two high school seniors. The most common feedback I got was that the relationship between these two characters was not developed enough. I heard this from at least five of the ten people I sent it to.

"There are ton of F-bombs in this."
"Where are the parents in all this?"
"The baseball sections look really good."
"You weren't kidding when you said rough draft."

The lack of a relationship between the two friends is a serious problem. It's not so much a foot in my mouth but more of a body that is lacking a foot. And how can a book walk without feet??? And I want this book to run, God damn it!

Another sketchbook, another seventy pages of draft. 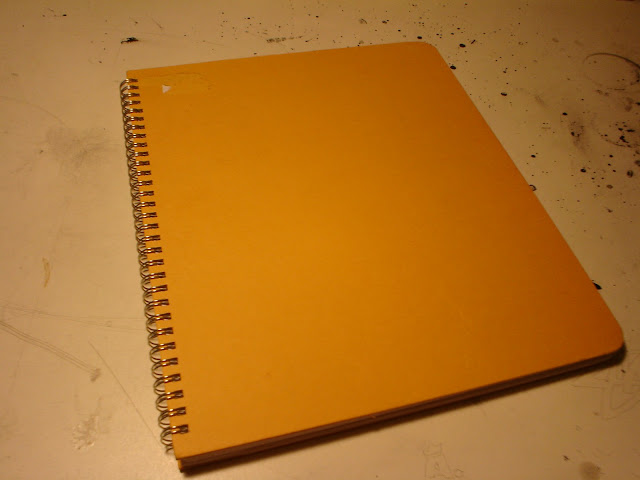 I scan those pages (and number them of course) and then create a new PDF containing the first draft and the additional scenes. That gets printed up and put into a binder. The physical act of putting the pages in the binder is a part of the editing process. Some pages from the PDF don't make it. The binder is the story fully plotted. This is what I will draw finished pages from. 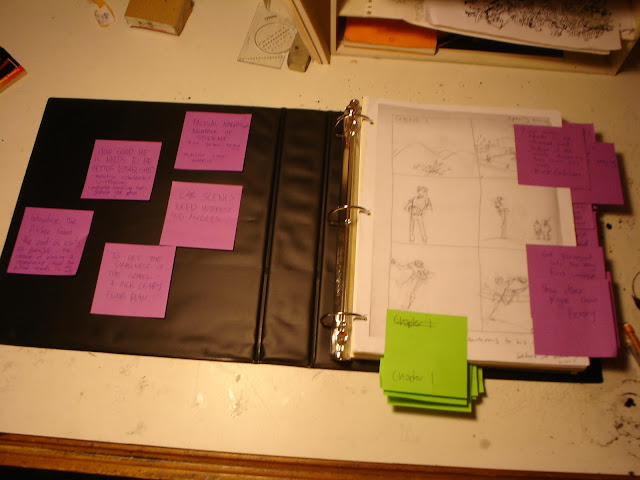 The purple notes are editing notes. These include comments from the people who have read the first draft as well as my own. The green notes are chapter breaks.

And this is the first finished page: 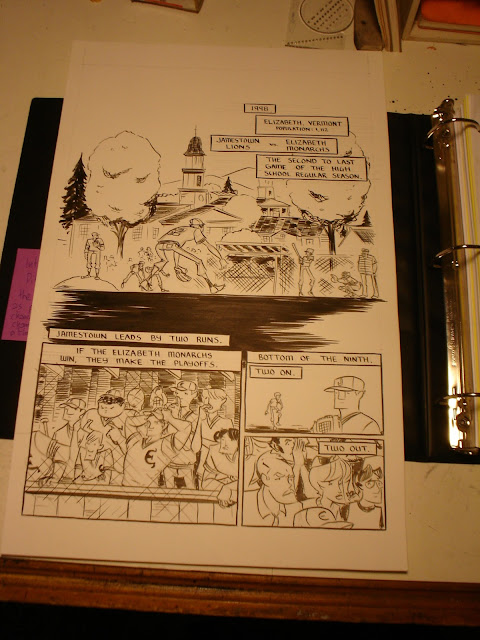 The first page of the rough draft: 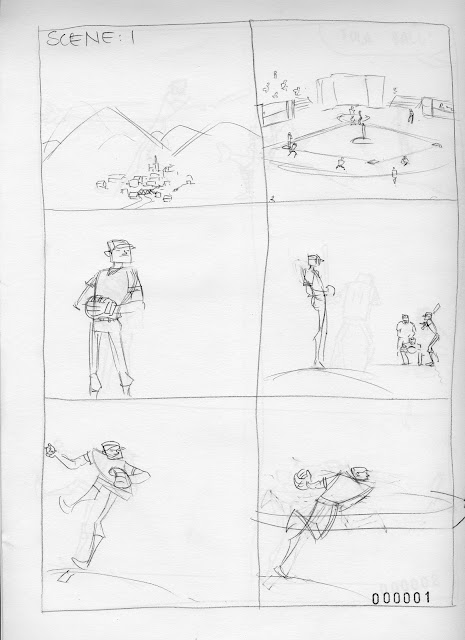 I know what you're saying, blog. You're saying, "Oh, that's nice, Jesse posted, today he is mine completely, but will he post tomorrow? Hunh? NO! He'll be posting on that little tumblr of his!"

There'll always be a place in my heart for you.